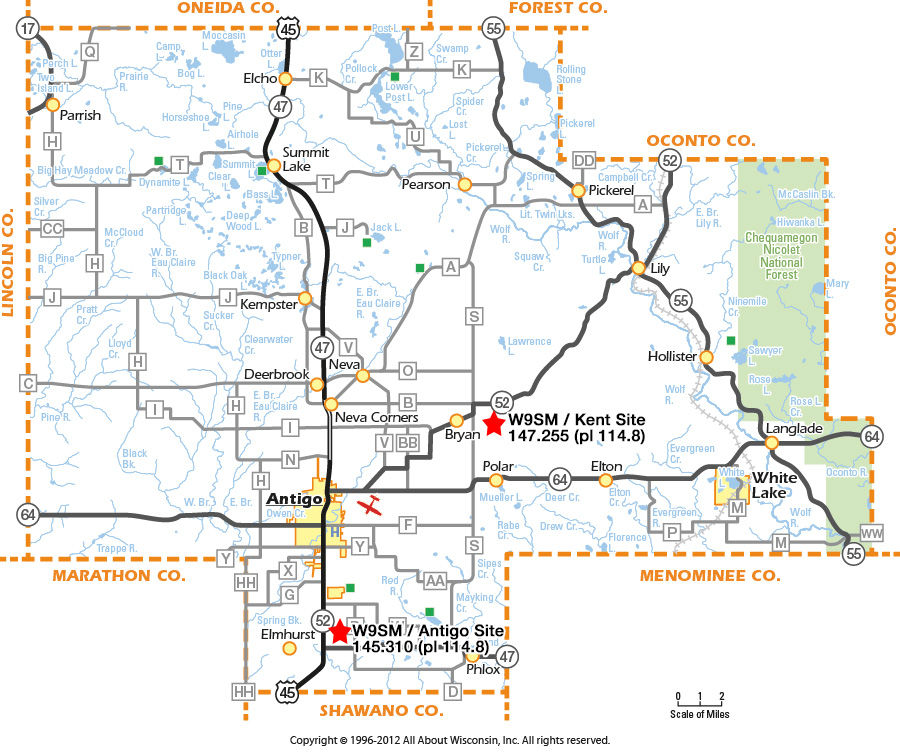 In the early 1990’s Antigo Amateur Radio operators installed the first two-meter repeater on the police radio tower just south of town on Gresch’s Hill operating of the frequency of 145.310 Mhz. The repeater owner was William Volm, KD9HH. Shortly after that the Antigo Repeater Association was formed. During this time many new hams in Langlade County got their Amateur Radio licenses in classes run by Bill Volm, Mike Hamman W9BHL and Diane Lodge Hamman KA9BHK. In the early 2000’s the Langlade County Amateur Radio Association was formed to help support the new Amateur Radio Emergency Service, ARES, group. On September 2, 2006 members of the Marinette and Menominee Ham Assistance Team, HAT, traveled to the Langlade County police radio Kent tower site. They installed a 4-element two-meter antenna on the northeast side of the tower, three support arms and 7/8 inch feedline to a height of approximately 260 feet above ground level. Shortly after a two-meter repeater operating on the frequency of 147.255 Mhz was installed. In November 2006 the LCARA merged with the Antigo Repeater Association to form a single club. The LCRA now operates both the Gresch and Kent repeaters under the club callsign KC9JZY. (from Langlade County, WI Amateur Radio History).

In August, 2016 the Langlade County Radio Amateur Club folded. The current repeater systems were built with equipment donated by WVRA members, so in order to keep the repeaters on the air, the assets of the two 2 meter repeaters were donated to the Wisconsin Valley Radio Association.

Both repeaters are open repeaters and available for use by all amateur radio operators.